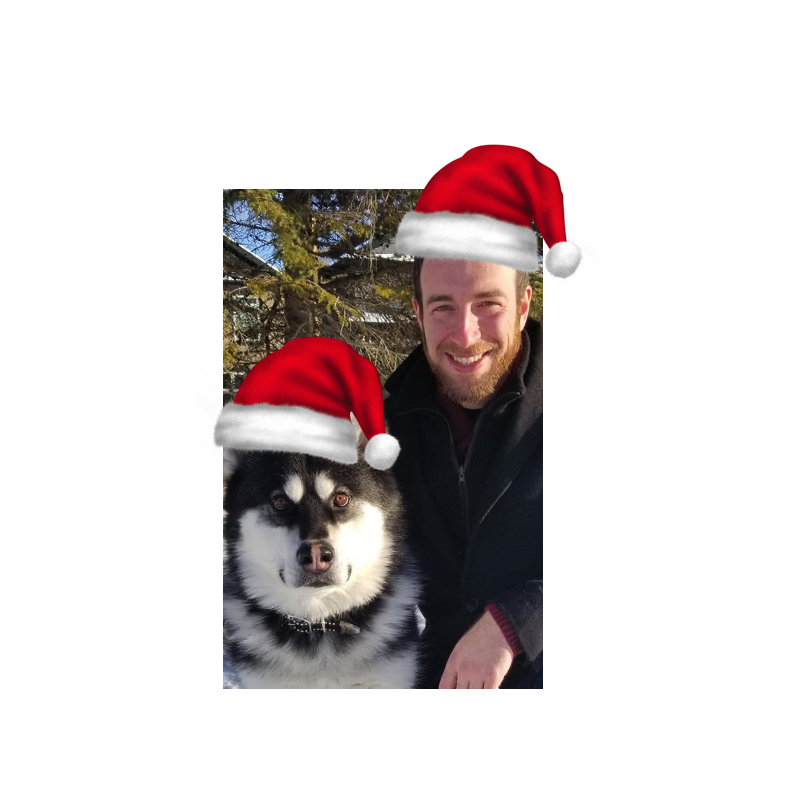 I can’t believe its that time of year again! The most wonderful time of the year!

The weather is perfect. I get to lay in my favourite piles of snow after an entire summer of laying in the grass. I sure wish Moosemas season would last all year long, but what’s a dog to do…

Oh boy, oh boy, oh boy! Let me tell you. Its a long story, so you have to promise you’ll scratch my ear…you know the spot.

A long time ago…about 4 years ago or, I was born! The fuzziest, cutest thing you had ever seen.

But for some reason every time I went to play with my friends, they would all laugh and tease me. Apparently my fur wasn’t quite right. Can you believe it? The most gorgeous dog in the world teased for having too beautiful of fur….

Anyway, after a lifetime (maybe 2 months?) of being teased and getting fed last for being to good looking, and not being allowed to play with my friends… I found my new parents!

They took me far, far away to the middle of no where and I loved it. And it just so happened to be around this time of the year! Thats why this time of year we celebrate Moosmas! We even have a tree! It’s just my mom and dads way of telling me how beautiful I am. Wishing you and your family a Merry Moosmas too! Now dont forget the ear scratching!! -Moose

The tradition of Christmas trees goes back to ancient Egyptian and Roman times, who also decorated evergreens.

St. Nick didn’t have a beard and did not wear a bright red Suit. He was a saint named St. Nicholas. He was also more generous than he was jolly.

The Dutch started the tradition of leaving St. Nicholas milk and cookies. No wonder he put on a few pounds…and this Dutch thing explains my wifes love of sweets. Interesting…

You can find these,  and other fun facts here: https://www.goodhousekeeping.com/holidays/christmas-ideas/g2972/surprising-christmas-facts/

Do You Know How To Potty Train A Toddler??

It is that time of the year. Yes that’s right, its potty training time!

We tried to potty train the little one a couple of months ago, and have been encouraging him to use the potty ever since, but it just ain’t working.

Ashley has a group of friends that met at a moms group. They recommended she read this apparently amazing book. Now I’ve been told I need to read it too. It’s titled “Potty Training In 3 Days”, written by Brandi Brucks.

Its not quite the typical book I like to read- I’m curious what genre you enjoy reading?- But if we can get bucko out of dipies, and into tightie whities,  it would indeed be a very merry Christmas.

Wishing you and your family a very Merry Christmas, and Happy holiday season.

If you have the magic potty training formula, please let me know!

For the kind words!

I went to see Dr. Tanti when I suffered from a herniated disc. I was in terrible pain in the beginning, and I saw him every other day. before long, I was back to work and back to life. Dr. Tanti did gentle adjustments to my spine and gave me exercises to do at home, all which helped to recover quickly. He is also very friendly and has a sense of humor that makes it that much better. I feel great now, but will definitely be seeing him for maintenance. I don’t hesitate to recommend Dr. Tanti and Capilano Chiropractic Clinic.

“Christmas is the day that holds all time together”- Alexander Smith

“Santa Claus is anyone who loves another and seeks to make them happy; who gives himself by thought or word or. deed in every gift that he bestows”-Edwin Osgood grover

“They don’t believe in Santa because they were always on the naughty list”- Dr. Joe Tanti

Wow that year flew by fast

I remember this time a year ago. We all thought (or hoped) things would be different in 2021.

“It will all be ‘back to normal’ by spring.”

Well, 2022 is on our doorstep and we unfortunately still need to be wearing masks (at least in the clinic).

But looking back at this past year I know I have a lot to be grateful for.

First I’m very grateful that my family and I have been fortunate enough to stay in good health.

I get to talk with other health care professionals (medical doctors, nurses, etc) and we all have seen first hand what it is like for people going through very challenging times in their lives due to a health crisis or pain episode.

While I am grateful to be able to help people overcome these challenges, I’m also very grateful  my family and I haven’t had to go through them. Hopefully you didn’t either.

Second, I’m grateful for you. It is my pleasure and great fortune to help you achieve your health care goals, and get to know you better over the next year.

What are you grateful for? What CAN you do, that you have been putting off?

Rather than focusing on what we have lost, or what we can’t do. Let’s instead focus on what we CAN do.

A Christmas Poem For Business Owners and Entrepreneurs

I didn’t make this one. First time I read it I laughed, so I thought I would share. **Not appropriate for a younger audience**

*It doesn’t rhyme much, but so what?

‘Twas the week before
Christmas
and all through
the office
not a creature was doing anything productive
except for the boss.

Everyone else was happily comatose visions of Xmas bonus checks dancing in their heads.

While the troops planned parties and played Internet games America’s last and lone working entrepreneur still struggled to get out a sales letter,
to process an order,
to input new names.

How futile his task,
how lonely his vigil watching for yet one last order by FAX
when all others watched only for eggnog.

When what to his wondrous eyes
should appear
but that big fat guy
in a red sleigh
pulled through the sky
by eight tiny reindeer.

Santa crawls through his window, plops in the chair by his desk,
pours a shot from his after-hours bottle, looks squarely at him and says,

“You think you’ve got employee problems?I’ve got elves.

“Elves, I say.
And who do you think refused to open even one damned letter received after the October anthrax scare?
Who opened them all?
These white gloves hide arthritic hands so shredded with paper cuts the numbing arctic cold’s a blessing.

“And my entire delivery fleet
servicing the globe
is powered only
by reindeer,
fleet of feet,
yes, but too often lame, and in case you weren’t aware,
diarrhea plagues the breed.

“While you deliver your goods through Internet or by mail,
I must suit up and squish down
chimney after chimney,
met by snarling dogs, hissing cats,
stale cookies and
Coke gone flat.

“So buck up, Mr. Entrepreneur.
January 2nd is just around the comer, commerce will begin anew,
your army will return
bellies filled to bursting from holiday feasts,
desk drawers filled with
credit card bills
that must be paid, so
Ho-Ho-Ho,
it’ll be off to work they’ll go.
After a few weeks’ training to
erase holiday induced amnesia
they’ll be back to normal,

your workplace’ll be abuzz,
while I will still be stuck with elves.

“Enjoy this little break in the action. Rest, relax, reflect, rejoice,
and remember,
after all, it’s all your choice.”

And with that,
and a final swig from
my now nearly empty bourbon bottle
(a gift from a vendor who’s gouged
me all year),
Santa was up on his feet,
out the window, and gone
in the blink of an eye.
Surprisingly agile for a man
of such bulk,
I thought to myself – one wonders
what his group health premiums
must look like.
I was oddly cheered by his visit, as he brought me the greatest of gifts,
treasured by beleaguered
entrepreneurs and business owners worldwide;
the insight, the perspective,
the warming reminder
that there is some other businessman looking over the fence at my
situation
seeing ‘greener pastures’, and
if all were to exchange sight unseen,
we’d all awake to the discovery ….
well, bottom-line,
at least I don’t have elves.

On my trudge from darkened office to snow-covered, locks-frozen car,
I stepped in a huge steaming pile of reindeer crap
and off in the distance
I could still faintly hear
old Saint Nick shouting
to those tiny reindeer,
“Get your asses in gear!”

The Podcast Is UP!

It may not be pretty, but it’s a start.

Are you planning your new years resolutions already? Is one of your goals to get into the bests shape of your life?

If that’s the case I recommend talking with Franky Wood. He runs Regnant Strength and Performance. He’s a great coach, excellent trainer, and even better person. Listen in on my conversation with Franky Wood:

So far there are 10 episodes up.

You can  find them on your Spotify app. If you don’t have the app download it in the play store.

My top 3 podcasts that I listen to are:

What do you listen too?

Who Wants A GOLDEN TICKET!? 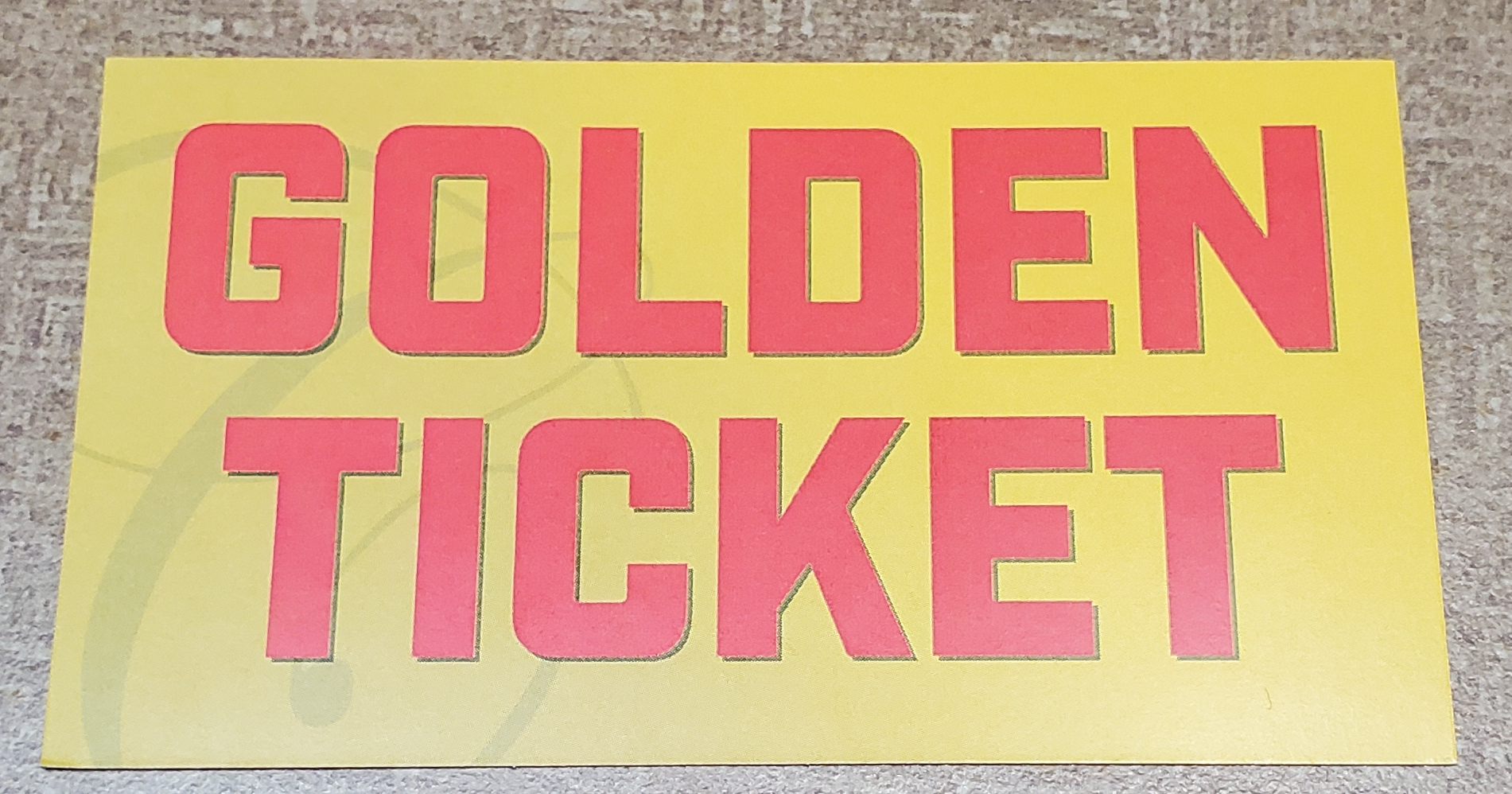 I love this part of the newsletter! Each month I’ll give you a new eTrivia question, and all who email me at [email protected] with the correct answer will be entered to win a…

Take your best guess then email me right away. Remember, your chances of winning are better than you expect. Whats a “Golden Ticket”?

Win and find out!

This month’s eTrivia question is…

Greatest Captain…Kirk or Picard??
A) Kirk- This is Edmonton and we love Cowboys!
B) Picard- the strategic and diplomatic captain
C) *Bonus* Spock- Was briefly captain, and the logical choice

We use cookies on our website to give you the most relevant experience by remembering your preferences and repeat visits. By clicking “Accept All”, you consent to the use of ALL the cookies. However, you may visit "Cookie Settings" to provide a controlled consent.
Cookie SettingsAccept All
Manage consent

This website uses cookies to improve your experience while you navigate through the website. Out of these, the cookies that are categorized as necessary are stored on your browser as they are essential for the working of basic functionalities of the website. We also use third-party cookies that help us analyze and understand how you use this website. These cookies will be stored in your browser only with your consent. You also have the option to opt-out of these cookies. But opting out of some of these cookies may affect your browsing experience.
Necessary Always Enabled
Necessary cookies are absolutely essential for the website to function properly. These cookies ensure basic functionalities and security features of the website, anonymously.
Functional
Functional cookies help to perform certain functionalities like sharing the content of the website on social media platforms, collect feedbacks, and other third-party features.
Performance
Performance cookies are used to understand and analyze the key performance indexes of the website which helps in delivering a better user experience for the visitors.
Analytics
Analytical cookies are used to understand how visitors interact with the website. These cookies help provide information on metrics the number of visitors, bounce rate, traffic source, etc.
Advertisement
Advertisement cookies are used to provide visitors with relevant ads and marketing campaigns. These cookies track visitors across websites and collect information to provide customized ads.
Others
Other uncategorized cookies are those that are being analyzed and have not been classified into a category as yet.
SAVE & ACCEPT